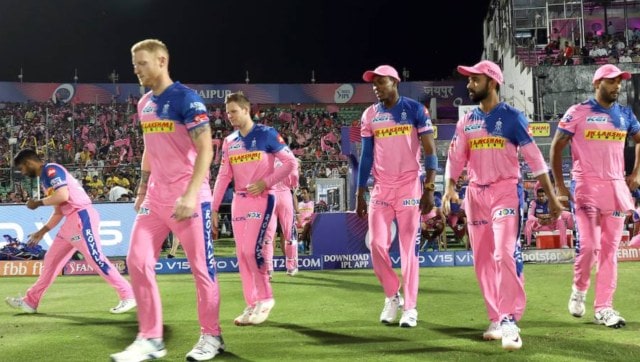 Rajasthan Royals started the IPL in style as the Shane Warne led side stunned everyone to lift the championship in 2008. Since then, however, they have remained the perennial underdogs, failing to repeat their maiden success. They have been very inconsistent and made to the playoffs only thrice in nine years. In between, they were suspended for two years following the spot-fixing sage.

RR had ended as runners-up in the Champions League Twenty20 in 2013.

Here’s how they have fared year on year

How did they fare the previous season: Rajasthan had a poor season in 2019 as they ended seventh out of eight teams in the table. They fought hard but didn’t have the power punch to finish off games as they lost close matches.

Win Percentage: Rajasthan are among five teams that have won more matches than they have lost. They have won 73 of their 147 matches and lost 69 with one ending in No Result and have a win percentage of 51.37.

Ajinkya Rahane has been RR’s highest-run getter so far with 2810 runs from 93 innings at 34.26. He has a strike rate of 122.65 and has scored two hundreds and 17 fifties. However, this season he will don the Delhi Capitals jersey.

Among the current RR players, Sanju Samson is the highest run-getter with 1532 runs from 61 innings at 27.85. He has a strike rate of 131.61 and has scored one hundred and seven fifties.

It may come as a surprise but medium pacer Siddharth Trivedi, who last played for the franchise in 2013 before being suspended for one year for not reporting approaches by a bookie during the IPL spot-fixing scandal in 2013, is the highest wicket-taker for RR. He scalped 65 wickets from 75 innings at 29.29. He had one four-wicket haul, an economy rate of 7.58, and a strike rate of 23.1.

Highest individual score: Ajinkya Rahane 105 not out vs Delhi Capitals in Jaipur in 2019

This was the second of the two centuries Rahane has scored in the league. Opening the batting, he scored 105 not out off 63 balls including 11 fours and three sixes. It helped RR post 191/6 on the board. However, it didn’t end up winning Rajasthan the match as DC chased it down in the last over with four balls to spare.

Rajasthan have their best win percentage against RCB – 55.55 (For teams against whom RR has played 10 or more matches) with 10 wins from 20 matches and eight losses with two ending in No Result.

Bogey team: CSK have had a wood over Rajasthan Royals. RR have lost 14 of the 21 matches played against them and won just 7 and have the worst loss percentage 66.66 percent (For teams against whom RR has played 10 or more matches)

When they played in the UAE: Rajasthan Royals had a roller-coaster ride in the UAE in 2014. They started off with a win but then lost their way with two losses and then again got back on track to end the leg on a positive note with two consecutive wins making it three wins and two losses from five. They didn’t end up qualifying for playoffs in that campaign, ending fifth.

Click here to check out the full IPL 2020 Schedule

IPL 2020 LIVE Streaming SRH vs RCB: When and where to watch Dream11 IPL on Disney + Hotstar and broadcast timings in India and...